Their debut album Imagine Our Love was released in 2007 through Rough Trade to rave reviews, and at last there is a follow up. Hailing all the way from Los Angeles, Lavender Diamond‘s new album Incorruptible Heart is a slice of musical sunshine. With a haunting refrain of ‘I love you I love you I love you‘ recent single Oh My Beautiful World makes me well up with adoration for my darling Snarfle every time I hear it, whilst Everyone’s Hearts Breaking Now conjures up a darkly beautiful world where heartbreak seems somehow manageable. She’s a whirlwind of creativity: I caught up with vocalist Becky Stark to find out more.

How did Lavender Diamond come together?
Well I had an idea about the lavender diamond, which was a myth about the original crystal caves deep in the earth and the beautiful sound they made! There is a belief that when one diamond was taken from the cave it silenced the sound, but the soul of the stone lived through the centuries and became the voice of a songbird named Lavender Diamond. I would be that character whenever I would sing or write as Lavender Diamond.  But then I wanted to be a band so I found Ron & Steve & Jeff – well kind of by magic: we just found each other and as soon as we played together it felt very powerful.

Who has been the biggest influence in your vocal style?
I’m not sure… but I really love Ella Fitzgerald. I think she was the most amazing singer.. but there are many other great singers who have influenced me… Maria Callas, Whitney Houston, Dolly Parton, Cyndi Lauper, Linda Rondstadt. I guess that’s a strange list!

What have you been doing since the release of your first album Imagine Our Love? I hear you have been particularly busy Becky…
Oh, well, I have mostly been singing and writing music! I joined the Decemberists for a year and sang the role of Margaret in their rock opera, The Hazards of Love. I also made a record with my other band The Living Sisters, and we made an amazing music video with Michel Gondry: The Living Sisters have a new record coming out in January. I also went on the road with She & Him, singing harmonies with Zooey Deschanel and opening their shows. Then I’ve been singing country songs with John C. Reilly & we made a little record that Jack White produced. What else? Oh!  I made a little animation series of uplifting slogans for MTV called Worldword! and also a web series called We Can Do It! 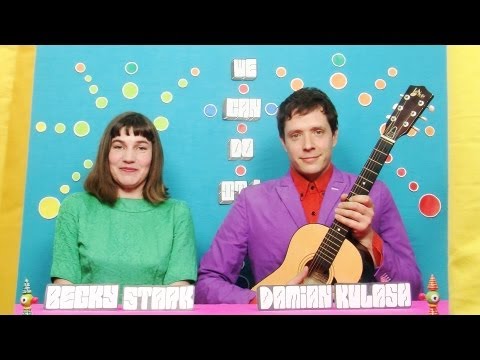 And I’ve been writing an opera. It sounds like a lot, but there’s always so much to do…

Your songs are quite epic… what kind of mood are you in when you write them?
Well – different moods. Usually I will write a song to express a feeling, because I need to understand and allow the meaning to change through the expression of the song.

You speak of the intimate and the global. Are there any things that are especially pressing on your mind and present on this album?
Yes! I think it is so important that everyone realizes that their relationship to everything in the world is direct.

It’s been a few weeks since your second album came out, who has been raving about it most?
Well – my friends really love it and that means so much to me!

There is some stunning cinematography in the Everyone’s Hearts Breaking Now music video: what was the idea behind this?
Oh, well, we had the idea years ago to make a video where I was dancing through the cosmos and falling and galloping through the stars, but we didn’t really know how to pull it off. By chance I ended up in a Doug Aitken video where I had to be in an aerial rig and it was just amazing so it was like I was born to do it! Dancing in the aerial rig was my fantasy come true and I knew we had to find a way to do it. Just a few days after that happened I ran into Maximilla and she had just filmed a test of an aerialist shot in slow motion through a prism, so then we knew we had to make the video like that together.

How was it shot and executed?
Well it was really miraculous: I can’t believe we actually pulled it off. We just asked for help! Our community in LA is really beautiful and supportive. We found the amazing amazing June Zandona, who shot it – and really it was just incredible how it all came together. Our friend Laurel Stearns introduced us to George Augusto who has an artspace called Dilletante and he let us shoot there. Then he introduced us to Elizabeth Newton who is the head of the Circus School in LA. And she agreed to help us because she wanted to help support the expression of the feeling in the dance, which felt so beautiful and heart opening. It was crazy though because I had only ever been in the aerial rig once: but I knew I could do it and Elizabeth believed in me… then it turned out that Elizabeth and I had worked together before because years ago she had been in the Lavender Diamond video for The Garden Rose that Maximilla directed, and she & I had been in a performance of The Citizens Band together in New York when I was a guest together with Amanda Palmer several years ago. So, Elizabeth introduced us to Chobi Gyorgy – who is a flying trapeze artist from Hungary and he builds trapeze schools across the U.S. – and he agreed to build a rig for us and to be my catcher: it was really like a miracle!

Our amazing friend Miss KK made a beautiful costume in just one day and everything came together so fast, in about a week, because there was only one day where Elizabeth and Chobi could come and we really weren’t sure we were going to be able to pull it off. We had to figure out how to blow up a crystal, and it was like an action adventure movie. Then editing it was another adventure – but oh I love it so so so much, it was a dream come true.

Incorruptible Heart by Lavender Diamond is out now on Paracadute. Stream and buy the album here.