Sue Denim is one half of electroclash duo Robots in Disguise, who launched with a bang in the same year that I began making Amelia’s Magazine: in fact they were featured in the first ever issue. Eight years and several albums down the line RiD have built a huge fanbase, particularly in Europe, where they are much loved. But for now Sue is taking a break: leaving the busy London streets for a simpler life in Wales, where she has lovingly crafted her acoustic debut solo album. And The Unicorn is a world away from the bleeps and shouts of RiD but it nonetheless bears her hallmark bounce in a series of incredibly catchy tunes which wonderfully showcase her sweet soprano voice.

Your debut solo album eschews the electronica of Robots in Disguise in favour of a much warmer lo fi sound. How did this radical departure come about?
I wanted it to sound very different from RiD, wanted it to be simple and warm in terms of sound. Then I found producer David Wrench, warm simplicity in recording being one of his trademarks!

When did you start working on your solo material, and what was the biggest difference to working together with Dee Plume?
I started writing songs on my own about 5 years ago, just after the recording of RiD‘s 3rd album, ‘Get RiD!‘, when I had a lot of time alone in Berlin, and found I loved writing on my own. Biggest difference – I was able to express myself fully without any compromise and get songs finished quickly!  Less arguments! But also, less laughing. Good and bad points to working alone.

When did you leave London and what prompted the change of scene?
I had been living in Wales to make the album and I just couldn’t move back, for various reasons (see next Q!)

I believe you fell in love in Wales, not just with the land but with a person… can you tell us more about what happened?
Love at first sight happened. Amazing! And then we made a record together. It’s been a very wonderful year.

What inspired the lyrics and feel of the album?
All sorts really. Some love, some loss of love, books, bikes, fresh air. Many changes – changes in relationships, including me and Dee not writing together, some death, some fantasy. Just my life I guess. 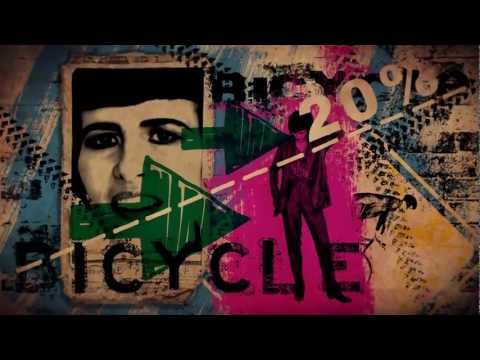 I love your animated video for the first single Bicycle – can you tell us more about the making of this.
I worked with the brilliant Graeme Maguire, who’s been a friend for years, we met in Berlin, and have worked together twice before – to make RiD’s ‘We’re In The Music Biz‘ and ‘The Tears‘. It was originally not going to be an animation, but just as we were about to shoot it all fell apart as our ideas were too ambitious for our budget. As it turned out, it was the best thing that could’ve happened – I think it’s an amazing animation, I couldn’t be happier with it!

What has been the biggest surprise about living in Wales?
The biggest surprise was how bored I have been on occasion!! I really thought ‘only boring people get bored’. Hmmm. You gotta be SO much more creative about finding interesting things to do in Bangor. I’m used to London/Berlin, where amazing cultural opportunities are everywhere. But I love so many things about it, too. The fresh air, the water, mountains, beaches..all the proper nature you just can’t get in a big city. And there’s a really exciting music scene. Check out Y Niwl, they’re  my fave Welsh rave at the moment!
I’m over my bored phase now!
Gonna be learning Welsh in a week or two, very excited!

Any top tips for a trip to Anglesey?
Yeah. Spend a night in Barclodiad Y Gawres (Apronful Of The Giantess!) – it’s a Neolithic burial chamber – I haven’t done it yet but I plan to! Let me know how it goes! And then, of course, Llanddwyn Island – totally beautiful.

What next for your solo project… where does it all go from here and what’s happening with Robots in Disguise?
I’ll be recording a second solo album soon, I can’t wait! And there’ll be some gigs coming up from us RiD playing all the golden oldies but no new music planned as yet. Nothing ruled out though, we may well get around to album 5 in the future!

And The Unicorn is out now on Sue’s own label, Superhealthy. Sue Denim plays Islington Academy on Friday 14th September.