Chalets at Rigi 1861 by Alexandre Calame. Oil on Canvas. All photos courtesy of the owner, Asbjørn Lunde.

Forests Rocks Torrents is a rare opportunity to see a collection of magnificent paintings by some grand names of European landscape art – part of the privately held Lunde Collection. This is the first time I’ve been invited to an exhibition preview at the National Gallery, but what the heck, I liked the look of the image on the invitation so I thought I’d trot along and find out if the exhibition lived up to first impressions. Forests Rocks Torrents has been themed around the concept of similarities between paintings by Swiss and Norwegians. Well, I say, of course they are similar! They feature mountains and wilderness, and were all painted over a similar period during the 1800s. But that’s not to detract from my enjoyment, for this is a fine collection of realist landscape art. We were by turns guided through the paintings by curators Christopher Riopelle and Sarah Herring. 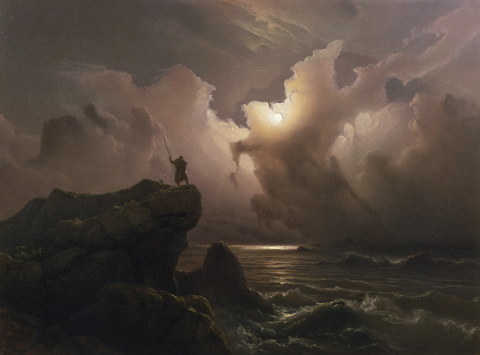 Scene from the Era of Norwegian Sagas 1850 by Knud Andreassen Baade. Oil on Canvas.

The first room hosts the epic grandeur of Knud Andreassen Baade, who places a small figure with arm held defiantly aloft on a cliff top at sunset. It’s a mythical Wagnerian vision of Norway that conjures up the warriors of a bygone era. Many of these artists were intrigued by the past, and menhirs – the remnants of a Viking culture that live on in the pastoral landscapes where peasants eked out a living at the foot of mountains – feature prominently in the art of Johan Christian Dahl. The beauty of the rural life (hardship unseen) is idolised in the Hobbit-esque homes depicted in Chalets at Rigi by Calame (at top), the low slung dwellings seeming to mould into the rolling hills as if in harmony with nature.

Robert Zünd was painting Switzerland at a time that tourism was yet to become a mainstay of the Swiss economy – as such the mountainscapes he viewed were something that people knew little about. Zünd used small amounts of red to draw attention to the tiny figures who would otherwise be overwhelmed by the sheer scale of the surrounding countryside. 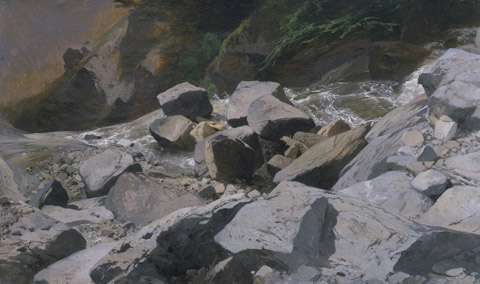 The River Lutschine near Lauterbrunnen by Alexandre Calame. Oil on Canvas.

Alexandre Calame was a grand master of European landscape painting who had a most unfortunate childhood. He was born with a limp and then lost the sight in one eye. When his father, a marble carver, died early, he was forced to take a job in a bank to help the family finances. Luckily good fortune prevailed and a banker discovered his artwork. He is now considered one of the greatest artists of the European landscape genre from that period. During his life he was commissioned by a huge European clientele who wanted a slice of Alpine wilderness in their luxurious mansions. They specifically asked for depictions of torrential rivers and wild weather, as typified in Mountain Torrent before the Storm (The Aare River, Haslital) Alexandre Calame was intensely religious and believed in the innate divinity of nature.

The Lower Falls of the Labrofoss 1827 by Johan Christian Dahl. Oil on Canvas.

I was intrigued to note that these paintings all have very specific geographic labelling, a highly desirable feature for prospective buyers which made the actual locations reachable. It immediately made me wonder whether these paintings have been used by climate change scientists to track weather changes: after all, these paintings may be all we have as evidence of the breadth of glaciers two hundred years ago. The curators seemed bemused by my questions but I’m certain I’m onto something.

At Handeck about 1860 by Alexandre Calame. Oil on Canvas.

Trees, as might be imagined, feature strongly in these paintings. The exhibition notes attribute anthropomorphic attributes to these majestic sentinels, but I am sure it’s far simpler than that – they were magnificent specimens of nature that we are asked to look on in awe. Some of Calame’s close up paintings of rock formations are rendered in a peculiarly modern graphic detail that belies their age. Johan Christian Dahl too, was obsessed with intriguing rock formations – in his Study of a Rock from Nystuen on Filefjell the rock is everything, and he would go on to include studies like this in larger pieces. 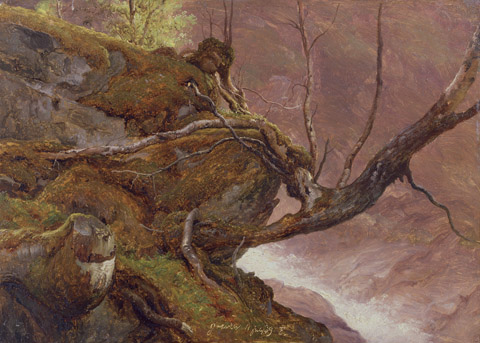 Thomas Fearnley was a prodigy of Dahl who travelled widely. He was also obsessed with rocks. In Arco Naturale, Capri, the languorously fluid tower takes centre stage. Some of his work in the exhibition was created in the marble mining regions of Italy, where he found the weather much more favourable. Widely acknowledged as a master during his day he sadly died before his 40th birthday.

Peder Balke travelled to the most remote stretches of Norway that he could find to locate vistas that were little known to public gaze. The Mountain Range ‘Trolltindene‘ reveals a mountainscape of bleak extremes – the jutting peaks towering over a roiling bay. Balke has an interesting story because he’s only of late become something of a cult figure – after his early artistic career failed to pay a wage he became a politician and then a real estate developer. Even in those days this was a far better and more reliable way to make a living! But he carried on painting in private and now his small experimental studies attract a large following.

This is a wonderful little exhibition that’s well worth a visit if you are in town with a spare half hour. Forests Rocks Torrents is quick to get around and offers a beautiful view of the European landscape when it was still pretty much an untamed wilderness, long before the days of ski resorts and Alpine hiking. Then, as now, it was something to look upon in admiration and awe, whatever your beliefs. Full information in my listings.