Out tomorrow, shop the fab new single from Trevor Moss and Hannah Lou, pilule now signed to Heavenly Recordings. When I was sent a link to the video for Big Water I was instantly intrigued to find out how it had been made – and Trevor was kind enough to get back to me straight away with a description of their ‘first stab at animation.’ Looks pretty darn good to me! So here’s our exclusive low-down, the making of Big Water, but first, watch the video. 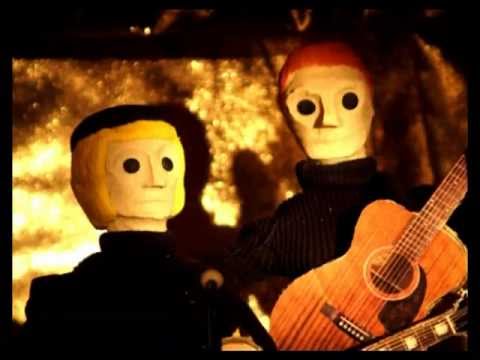 Trevor describes the making of Big Water:
We decided a long time ago to make all of the videos for Quality First, Last & Forever! as a series. Having made the videos to Spin Me A Rhyme and Making It Count in the same one-take performance format in front of the Quality First, Last & Forever! banner we wanted to maintain the continuity but were struggling for a way to use the lyrics visually like we had previously done. We toyed with a few different ideas as to how we could develop the motif.

The idea for a stop-motion video probably came to mind on a late night drive-back from a show in our van. This is when we usually throw ideas back and forth for videos, films or adventures, with caffeine-fuelled, judgement-impairing energy. Thing was neither of us had any real experience of stop-motion animation. I was very cautious and it was Hannah-Lou’s early enthusiasm which got the project under way. People often ask us how we manage to remain married spending so much time together in close proximity and writing and performing songs. All of those things are a breeze compared to animating. And we are very pleased to be celebrating our third wedding anniversary this week!

To begin with we were simply going to animate a studio video in front of the banner like before, but replacing us with dolls. However this didn’t justify the format, we still needed an idea for their performance which was eluding us. One of the previous concepts we had been toying with involved filming at Beachy Head, but logistics and budget made it impossible. Once we’d committed to using stop-motion we realised we could bring the cliffs to us, and the idea spiralled from there.

The song Big Water gave us limitless scope, and we were soon both living vicariously through the miniature versions of ourselves, sailing the high seas and fishing. We brainstormed the storyboard for about a week, eventually getting down to frame by frame detail until we had a strict shooting list. It took about two weeks to design and make all the scenery, props and cast. Despite the rigorous planning we were still encountering problems regularly during the shooting. Walking on sand and crushed velvet, lighting a fire, moving water and clouds were among our many challenges. Our complete inexperience and lack of any training meant we were constantly having to invent techniques as we went along. Once we were ready to go it took seven, twelve hour sessions of animation followed by two days of editing to complete the film.

Well, I say a massive well done, because the resulting video is brilliant. If you like the sound of Big Water why not grab a free download too? It’s a special Trevor Moss and Hannah Lou cover of George Harrison‘s Your Love is Forever.